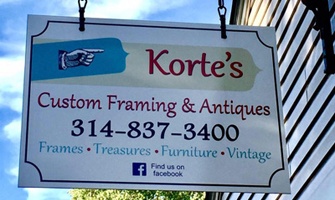 Serving the St. Louis Area Since 1946

Frank and Josephine Korte opened Korte’s Electric in 1946.  They opened it as an appliance store before there were televisions in every home.  Every Friday evening, families would grab lawn chairs and coolers and sit in front of the store to watch the televisions displayed in the window.  They later sold the inventory and started the hardware business.  Years later, he began the custom picture framing.  Frank retired from the store in 1987 and his son, Tom Korte, took over the business.  Tom ran the hardware and picture framing until 2010 when he passed away from cancer.  Michele (Korte) Reynolds took over the business and continued picture framing and introduced the vendor booths.

We currently have approximently 800 custom frame mouldings in stock plus ready-made frames including round and oval. We frame prints, oils, watercolors, portraits, all types of needlework and shadow boxes. We also carry glass domes and plate hangers.

Korte’s is continually getting new frames, antiques, and gift items into our store. We currently have approximently 15 vending spaces which holds an assortment of collectables, antiques, embroidery services, and much more.

Come in today to check out what’s new at Korte’s!