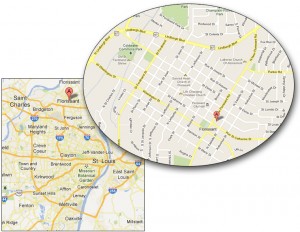 The exact date of the first settlers is unknown, but Florissant is one of the oldest settlements in the state of Missouri. Some historians believe it was settled about the same time as St. Louis.

The first civil government was formed in 1786 by the Spanish with archives in Havana revealing the population at 40, and seven plantations in Florissant at the time of the 1787 census.

The village, called “Fleurissant,” or “Blooming” in English, by its French settlers and “St. Ferdinand” by its Spanish rulers, was a typical French village with its commons and common fields, originally a separate town, and now an inner suburb of St. Louis.  As late as 1889, the town was predominantly French-speaking, while the southern portion was populated by German-speakers.

Old Town Florissant is the historic district of Florissant and has maintained a lovely vintage charm.  Old Town Florissant is filled with century homes, businesses, restaurants, and shops housed in historic buildings along tree lined streets.  We invite you to spend the day with us, shopping, dining and enjoying shady parks and beautiful historic houses and churches.

Old St. Ferdinand Shrine is the oldest Catholic Church building between the Mississippi and the Rocky Mountains.  St. Rose Phillipine Duchesne, one of Missouri’s foremost pioneer women, established the first school in Florissant.  She lived in the convent fro 1819 – 1827 and again from 1834 – 1940.  She was canonized on July 3rd, 1988.

Original building was built in 1866 for the German speaking families in Florissant and served as a school and convent. Church was also built and was completed in 1867. Church museum is open the second Sunday of each month. 10-2pm.

A square bounded by St. Ferdinand, St. Denis, St. Charles and St Louis was the gift of the Spanish government to the Villagers for a church, burial and parade ground. Pioneer families lie here in unmarked graves.

This was the first protestant Church in Florissant. It was known as the Union Church. Throughout the years is has served three denominations. The church is available for wedding and receptions.

Located on the McCluer High School campus. Although not in Old Town Florissant it has always been a part of the Florissant Valley area. It was the hunting lodge of John Mullanphy and later became the country home of Mullanphy’s descendants. The home is beautifully restored. Taille de Noyer is presently owned by the Florissant Historical Society.

The Gittemeier House is currently housed by Historic Florissant Inc, a non-profit that holds archives, pictures, and other historical materials for the Florissant area.

Buillt in 1878, the station was a connection between Florissant and St. Louis City.  It currently houses Mommy’s Design Farm, a sign painting craft busy that holds classes for everyone.